As early as 1896, Professor Kennedy (of Messrs Kennedy and Jenkins) proposed a joint venture for both power and tramways in Kirkcaldy. In 1898 he was appointed as consultant engineer, by the newly formed Tramways and Electric Light Committee. His proposal was to build a power staion on Victoria Road, in Kirkcaldy. 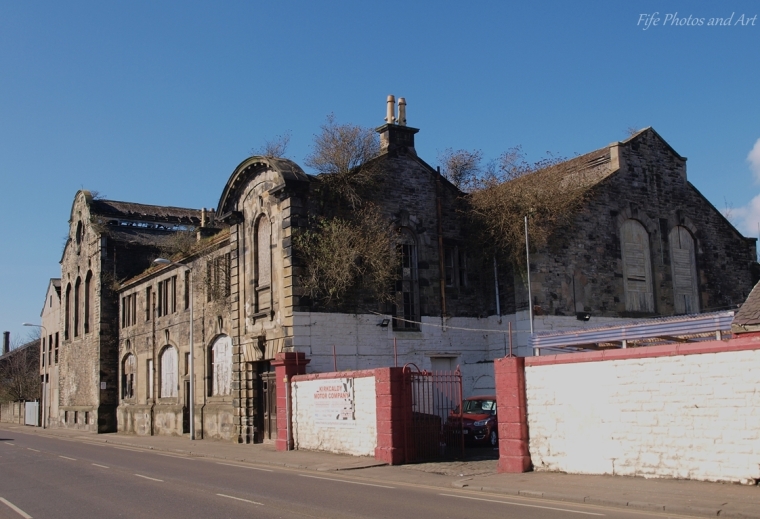 The main contractors were J & P McLauchlan of Larbert, but building was hindered by the difficulty of obtaining sufficient stone from Grange Quarry, at Burntisland, as well as the necessity for digging engine beds to a depth of 10ft. Three boilers and five engines (2 at 80hp and 3 at 250hp) were supplied by Browett, Lindley & Co Ltd.
The Victoria Road Power Station first generated electricity on 15th December, 1902, and was formally opened on 28th February, 1903 when the power was officially switched on by Provost Tait at 3pm. Guests from this ceremony were then driven in carriages to Gallatown to inspect the new tramway depot, and returned to town on a tram. The first service tram was run on Monday 2nd March, 1903. In 1909 the gallery was extended and a store added, a cooling tower was built in 1912 and a new engine room in 1922. The power station shut in 1931, and appears to have been derelict ever since then.

There have been plans to demolish the building and then use the site for an old peoples home and small supermarket. Thankfully ‘Historic Scotland’ stepped in and objected to the plan.

Another View of the Old Victoria Power Station

But now the owners of the building, United Investments, have put the building up for sale, for the nominal price of £1, as Historic Scotland is adamant in its position that the facade of the building be retained. The developers are saying that this will cost millions of pounds (I’m not a builder, but I can’t see why a facade would cost so much to preserve, the rest of the building will be demolished anyway), and at least one councillor (George Kay) has quoted that he believes the whole building should be demolished.

The top half of the Victoria Power Station Building

I, for one, am hoping that an investor will see the beauty of this historic building, and at least preserve the outside of the Victoria Power Station.